Synopsis: DCI Jo Davidson faces increasing pressure from all sides as AC-12 make major breakthroughs in the investigation, but an attempt to interview a key witness goes horribly wrong. 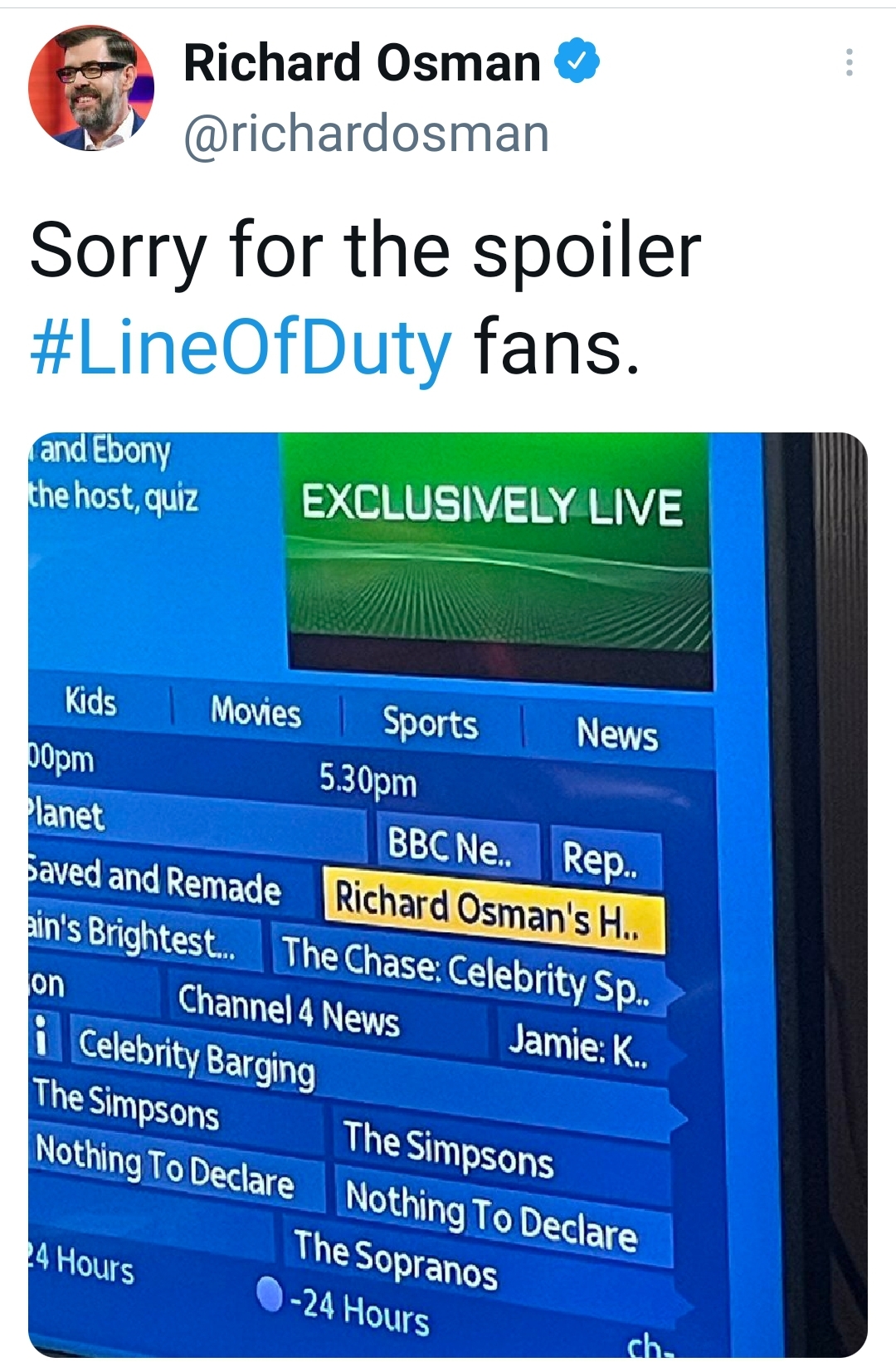 3
Buckells the next time he makes a cup of tea.
https://i.redd.it/v9wewwippps61.jpg 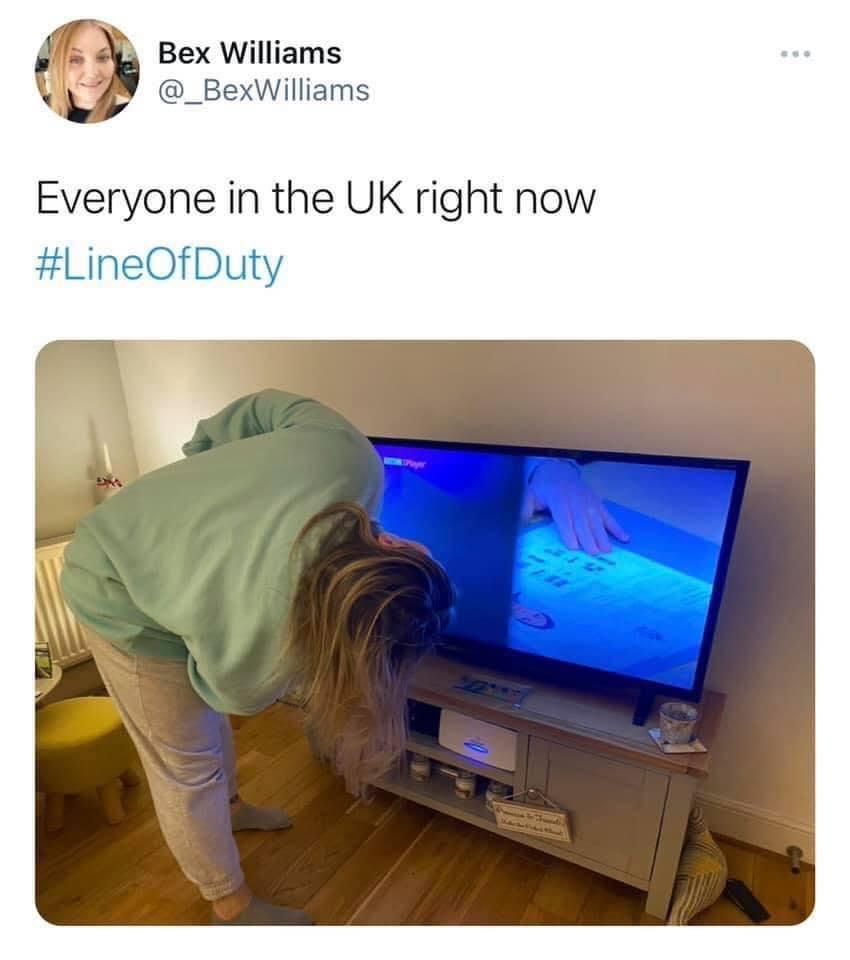 340
r/lineofduty • Posted by u/beansontoes 23 hours ago ( i.redd.it )
Cafe in Glasgow now offering your favourite quotes and terms in the delicious form of an empire biscuit!
https://i.redd.it/90frbiesips61.jpg 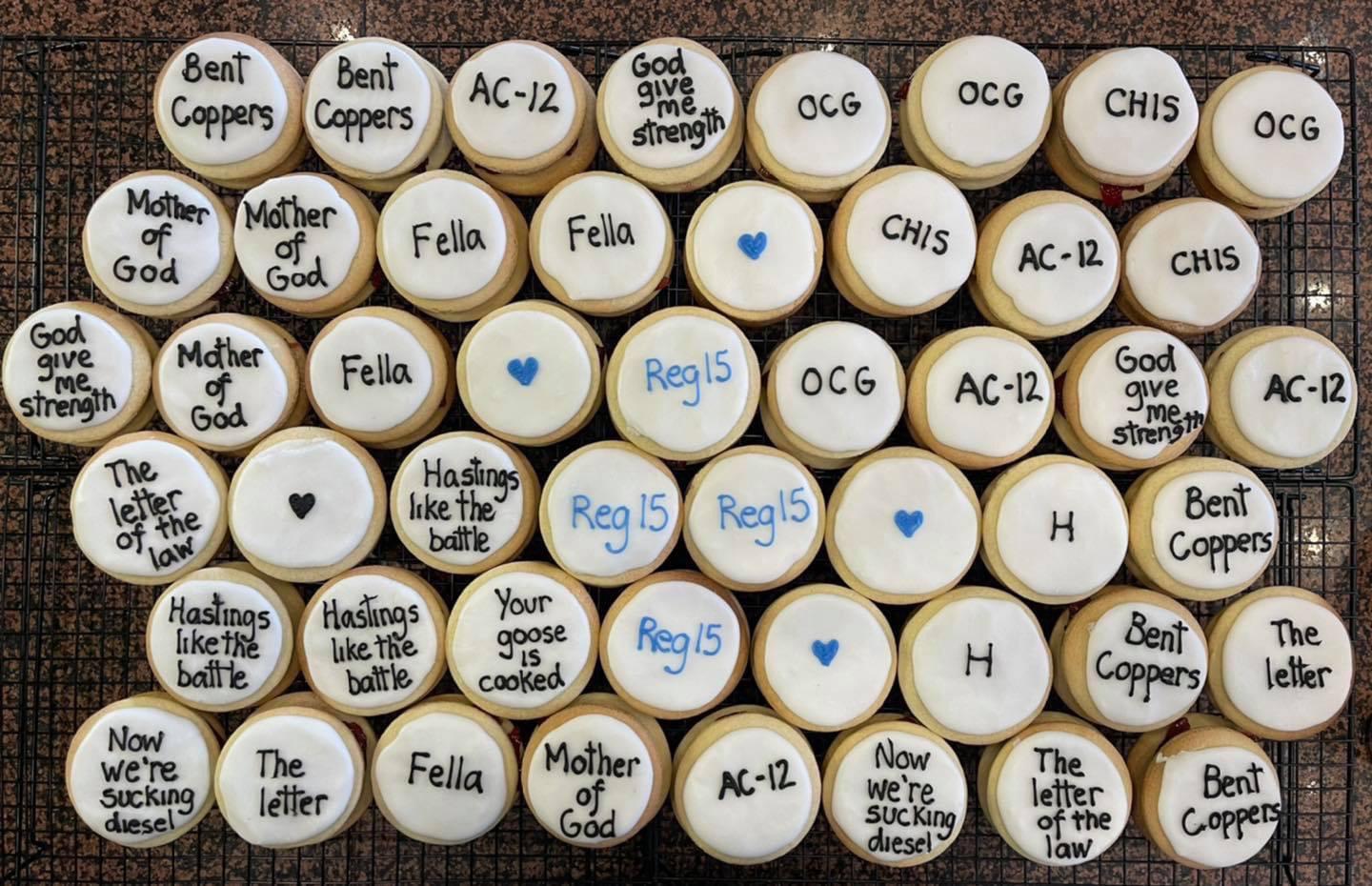 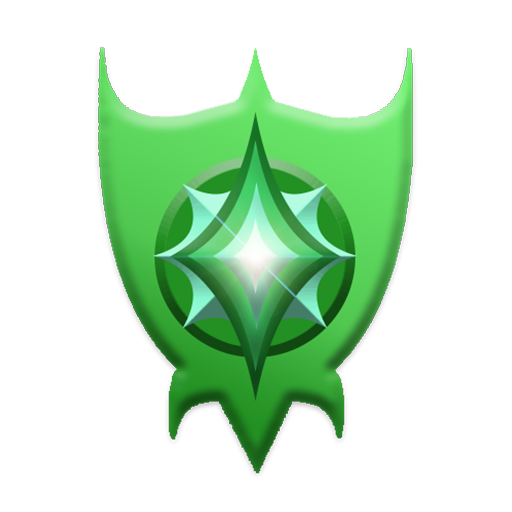 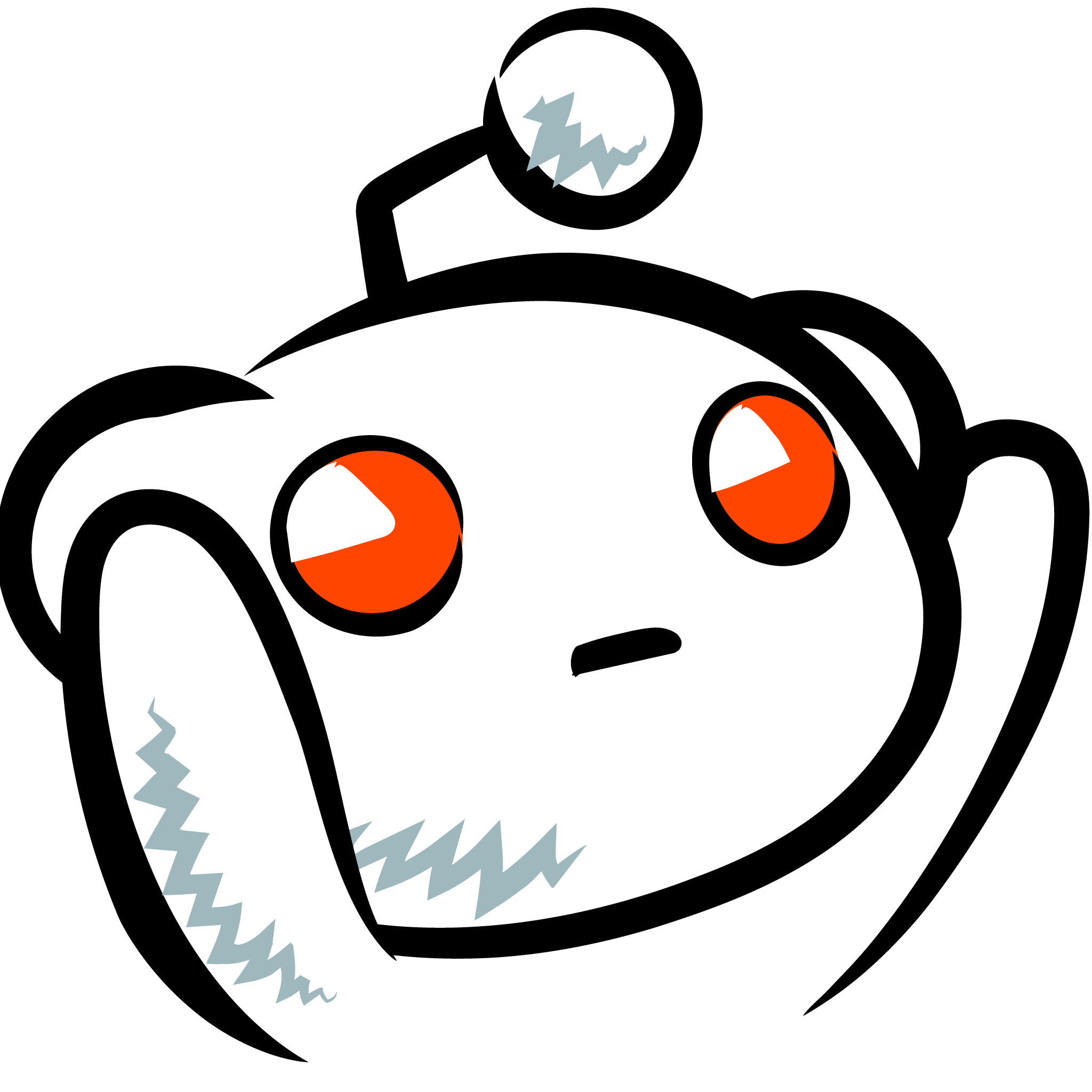 This is Tiernan McCready. This is what a hero looks like. In Bogside he saw three males grab an 18 year old girl and try to get her in their van. He reacted instantly, shouting at the males, led the girl to safety and told his mother to ring the police. NEXT FUCKING LEVEL
https://i.redd.it/uljj5uglxqs61.jpg 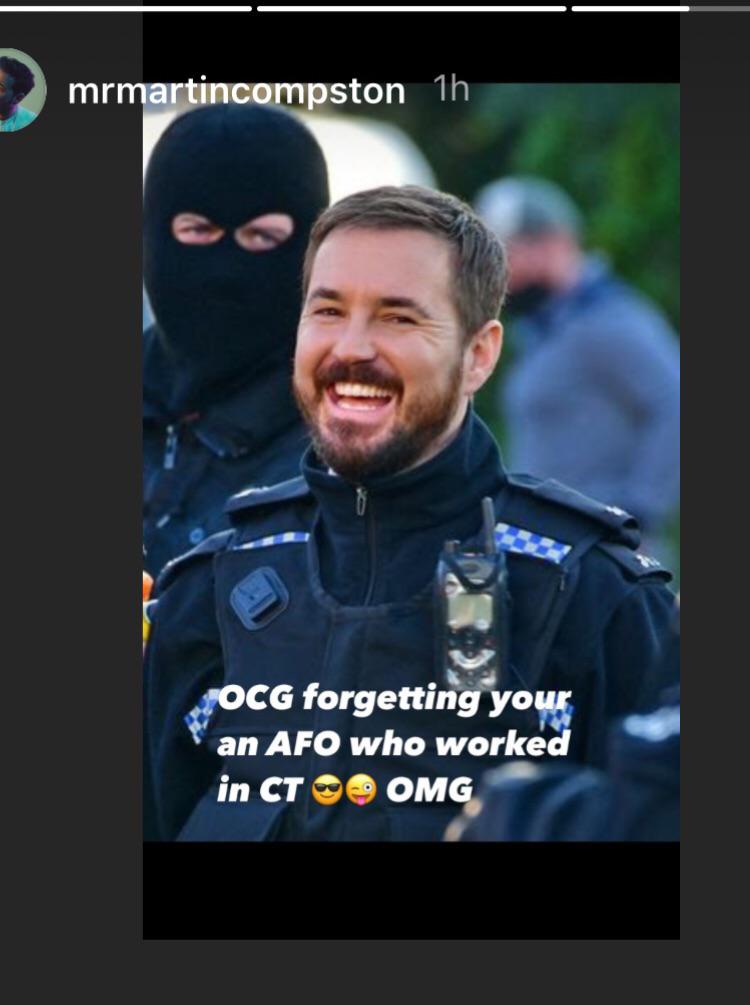 28
r/lineofduty • Posted by u/ashyjoints 11 hours ago
How is everyone apart from AC12 so casual about the balaclava-clad men in the series???

There are a bunch of events in the series that would be absolutely crazy to anyone in the public and can't be covered up, for example, the actual SHOOTING by Dot in the police station and Kate's wild gun-carrying foot chase in season 3, the ambush and killing of multiple police in the beginning of season 5 AS WELL AS the second ambush of the weapons convoy and now the (spoiler) violent public shootout in episode 4

Even if you add what the police might cover up, within the police force most people would know about the attempted murder of Gil bigelow by a police officer, the killing of 4 police by 2 corrupt officers in the ambush in season 2...

It's all absolutely fucking wild?! Imagine hearing about this in the news!! How is the killing of Gael Villa the most high profile case? There have been multiple events in which balaclava clad men have attacked and KILLED police officers, and how is this not the biggest story? How are the police commissioner and hastings boss completely ignoring this?

Even if you forget about corruption... Why is AC12 the only unit investigating a group that's killing police every few years??

280
r/lineofduty • Posted by u/No-Consideration-270 1 day ago ( i.redd.it )
Anyone else close to creating a briefing presentation? 😂
https://i.redd.it/sqxc2yq8cps61.jpg

I feel like everything is setting up nicely to close the series off. I love LoD as much as the next person, I consider myself a fanatic. However, a good show going past its shelf life can really tinge the view in the overall show. Anyone can name a show that has either gone past its shelf life, or had a bad ending. S6 of LoD is shaping up to resolve everything.

The ending of S4(?) really left a sour taste in my mouth, where they reviewed Dots dying declaration and suddenly saw him holding up 4 fingers? I feel as though that was purely to get another few seasons out of the show. It could have easily ended at S3, and whilst I'm happy it didnt and this season is blowing my mind, I'd rather have the final season blow my mind than it just go on and on and on.

In the ambush during the finale, the stinger was launched to intercept the lead AFO vehicle by someone looking female (Lisa maybe?).

Once the tyres were popped on the lead AFO vehicle that person then retracted the stinger before the Van drove over it. The van only flipped because the driver veered into oncoming traffic, missed the red car and then the driver lost control.

Once crashed, the van driver takes no further part in the action, and we don't seem them onscreen. What happened to the AFO driving the vehicle? Why did they not partake in the firefight. Shooting the driver would also take out the vehicle easier than the stinger would have.

What if the OCG were planning on kidnapping James Lakewell and Steve Arnott, and the van driver was in on it?

EDIT: Alternate theory, given Lakewell made it to the van without getting a broken wrist, the prison staff were surprised by the AC-12 pickup and informed the OCG short notice who scrambled a bunch of goons with no real plan to intercept the convoy. Hence the mess with the stinger and most the balaclava men getting shot vs one AFO.

A popular theory now for sure, frankly a cliché actually given how many people came to the same conclusion as me. I only got to watch episodes 3 & 4 today, so have been avoiding Line of Duty social media stuffs, so was surprised that so many have seemingly clocked it.

I really only cottoned on after rewatching Seasons 1-5 alongside the Season 6, and Hillside comes up far too often to be a coincidence. To be honest, given Mercurio's love of call backs and previous season tie-ins, Hillside is almost certainly going to be the 4th H (which I'm personally fine with as it's been signposted a lot).

Hilton makes mention to Kate in Season 1 that Hillside station has been reducing the cataloguing of knife crime at a substantial rate, and we later know Hilton is an "H" alumni.

We are then made aware of the fact that Lindsay Denton served at Hillside during her beginning tenure. As did Jeremy Cole who was behind Tommy Hunter's murder.

Mike Dryden was posted at Hillside upon graduating into the Central Police.

Dot Cottan started out here too of course.

And now Ryan is now posted there to play Dot's role.

So yeah, definitely leaning into the last H is Hillside, or perhaps a combination of the location and whoever is in charge of postings there.

Apologies for the long post, needed to let out my theoretical spiel somewhere, and my family don't watch Line of Duty because they're heathens like that.

i have just finished a rewatch of line of duty, and as it is 1 am my brain has decided to go full theory mode, this may have been posted before however i believe that osborne, who is now CC, but was in charge of the CT unit steve was in is the 4th man

firstly the “racist element” mentioned, this implies race is a factor in some cover up, perhaps the way the CT officers explained the screw up leading to ali’s death was by saying they were suspicious of a muslim family

secondly is his want to get rid of AC-12. it was clearly stated that AC units are being cut down. not only did hastings imply this was down to the CC, now osborne, but also the PCC seems very uneasy at this descision, implying perhaps there is some leverage on him, or this is not a descision he supports.

third is the fact he is a “bare faced liar”. he clearly had few qualms about covering his own back if needs be. he couldve easily pulled strings and he could be the top dog. it would make a lot of sense for the “final boss” to be the literal top dog of the police force. wether he is the 4th man or not osborne seems to be stacking up to be someone we’re returning to 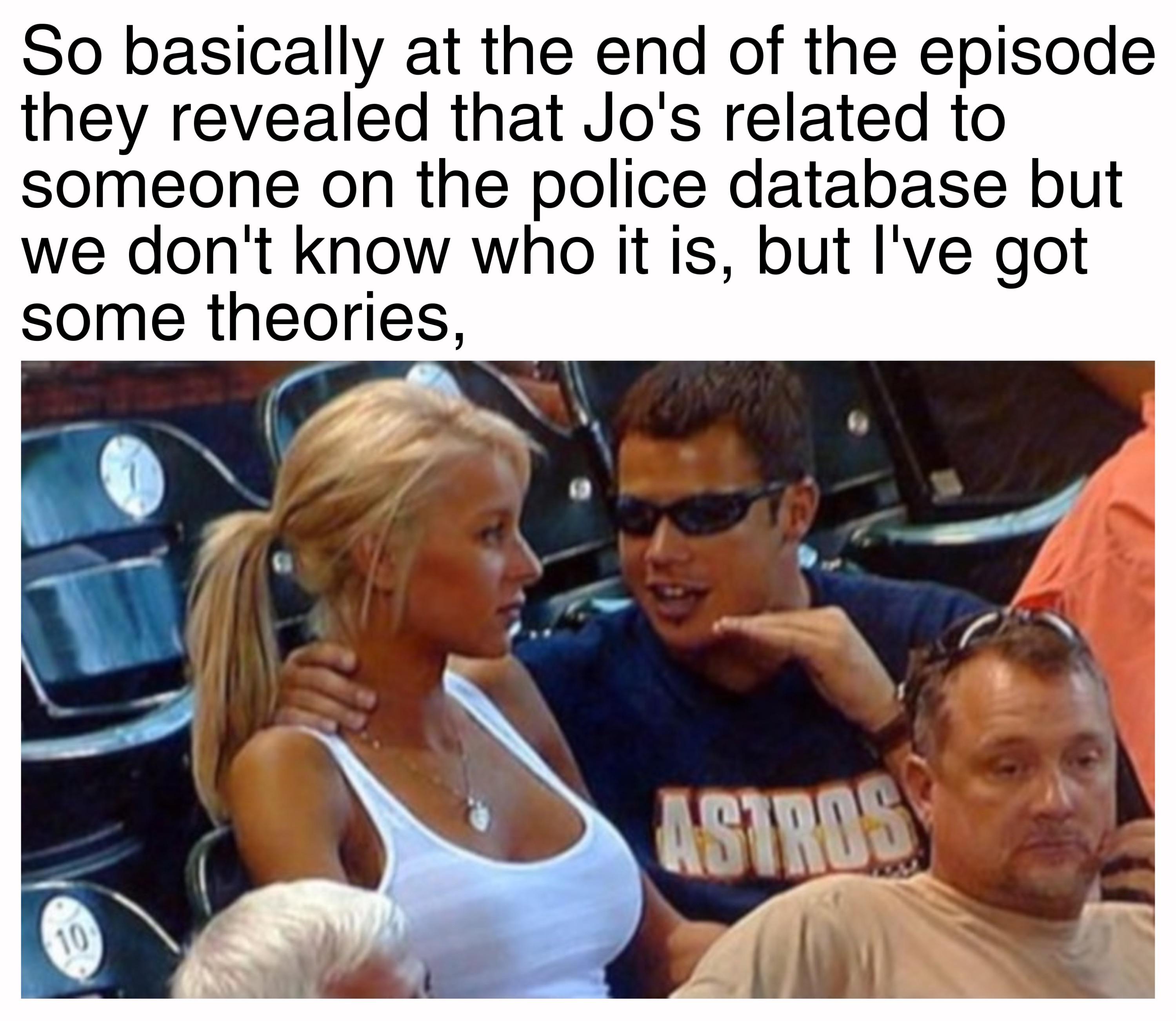 a bit of a wild one, but bare with me on this.

Buckles has been in the show since series, in some form or another. He's constantly being promoted or being put in charge of cases, despite...seeming a bit of a dimwit. He has masonic connections (link to Fairbanks) and plays golf (link to Hunter). He's also from the local area/ the city where the show takes place, so like Dot, he could have grown up around the likes of Tommy.

I feel like Jed is going almost too heavy on the idea that Buckles (let's remember he's a bloody Detective Superintendent - somehow) is both incompetent and ''couldn't organise a piss up in a brewery''. He's been painted to either be a low level colluder with the OCG, or at best someone who's accidentally got himself involved.

I've re-watched series 1 - in particular the golf scene where Gates confronts Tommy. isn't this Buckles in that scene, shown for about half a second, with his clubs - walking towards Tommy. (see below)

My theory is, that he's a lot higher up in the OCG than we've been led to believe, to the point where many in the OCG don't know his identity, and as such, he's able to maintain his cover and the facade of a dufus. Think Keyser Soze/Verbal Kint in the Usual Suspects.

I think he could be the brains behind it all. At very worse, the 4th ''H'' or whatever. I just wanted to say that Buckells line “I don’t know what I don’t know” is fantastic writing and delivered brilliantly by Nigel Boyle!

Really shows the incompetence and ineptitude we have witnessed over the series within that one line!

I’m really struggling to like/trust Kate in this series. Right up till the end of episode 3 I thought she was undercover and that was the reason behind her behaviour. In fact there were some looks/nods between her and ted which seemed to indicate that. Then in last nights episode there was the chat between her and Ted which kind of put paid to any idea of her being undercover for AC12. As well as her preachy speech at Steve about how not all coppers are bent. So, is she still undercover but working for a different AC? Or has she just had a complete and utter personality change and if so whyyyyyy???? Interested to hear what you all think. 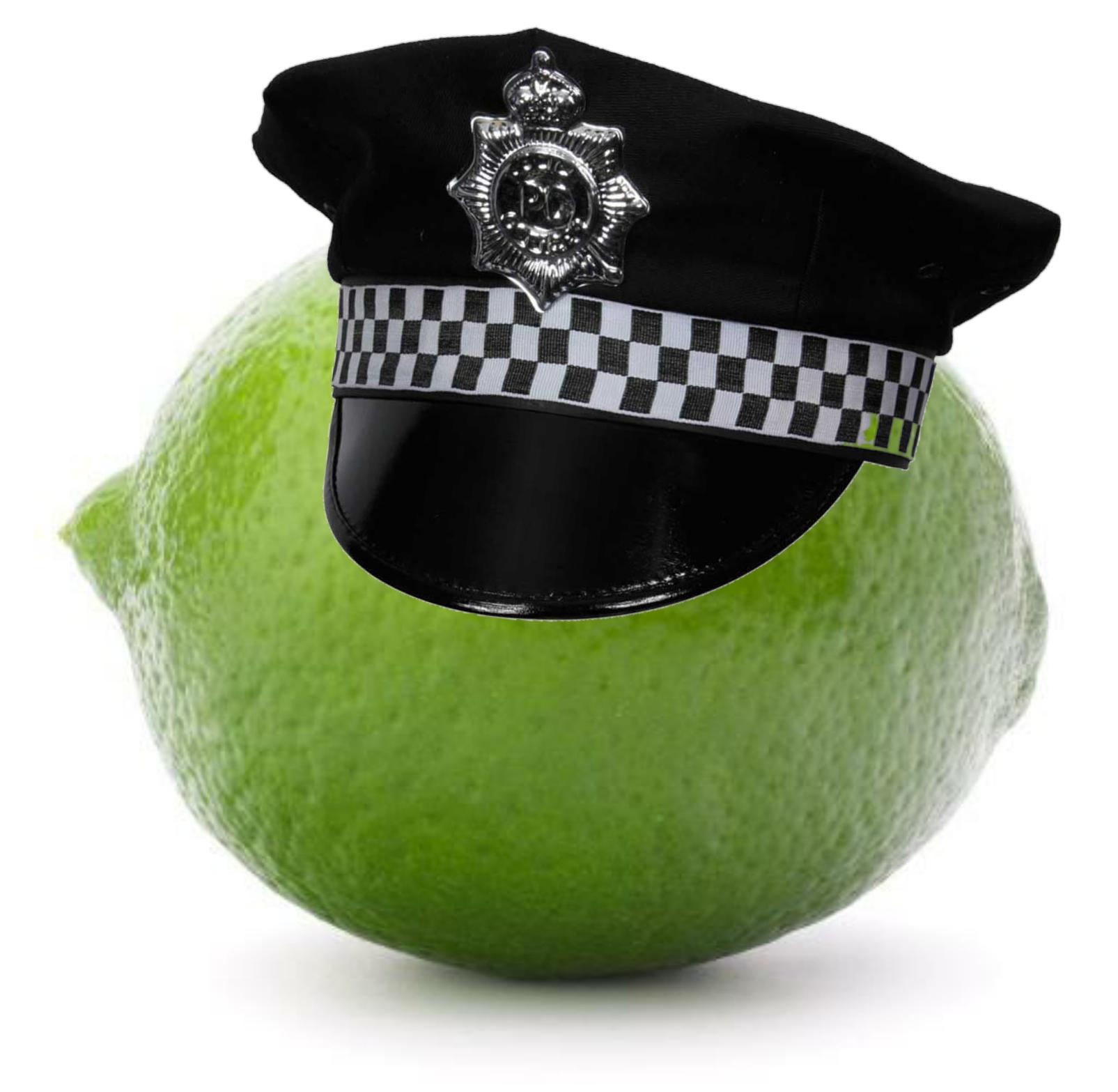